Why Donald Trump is happy with Education’s status quo

After the normal educational story covering more than a decade, the penultimate chapter consists of two students sitting in an exam, wondering what they will leave this experience with to enter the ‘real-world’. In this story, the two students are essentially the same type. Same school, same background, similar parents, but there is one key difference in that for the last 5 years student A has had private tuition. Extra performance enhancing tuition that the school didn’t only endorse but encouraged. In chapter two, the principal said ‘Great!” when the mother said they were organising a tutor.

Student A’s results turn out better than student B and in the final chapter the school celebrates student A with extra awards and accolades, displaying how much more value and appreciation the school places on student A. The tests announce success while turning a blind eye to any privilege or advantage. The school ignores privilege to then celebrate it in graduations. This is exactly as Donald Trump would design it.

I used private tuition as an example of any number of privileges that become the real determinants of school success. I used it because people pay cash for this performance enhancement. I say performance because after all, Ken Robinson, John Hattie, my students, and many parents agree that school is about performance and not learning. Every Principal in the world will agree that the Russian Olympic team should be banned from competing due to formalised, endorsed, and paid for performance enhancement that makes the test of ability unfair and unscientific. Those same Principals then all enjoy their own school’s graduation ceremonies quietly forgetting the unfair and unscientific testing of ability and celebrate any doping the students could get their hands on. If Education ran the Olympics, it would smile as every country doped as much as they could. Sad to think of the private tutoring pandemic that will follow the Covid19 one to make the playing field steeper than ever.

Not wanting to unravel a long history here, let’s just say that what schools do today and how they measure performance was defined over a number of decades leading up to World War Two. After the war, we extended how many teen years one would stay in school, but the experience and value judgments have stayed the same. So it’s important to recognise that when education was designed before 1945, the world was very much as Donald Trump sees it.

During the first half of the last century the vast majority of people were low paid workers, a small minority were middle class clerical workers (exam passers), and a tiny elite were often decision makers of importance normally because of hereditary privilege. The world was comfortable with the normalised elitist structures of class and accepted that most people were not required to think but just to follow instructions. So the school system was designed by the “Trumps” of the day to confirm their deserved privilege and only worry about everyone else’s ability to read instructions while measuring and counting items. In this Trump world, even the successful exam passers were mostly destined to become non thinking paperpushers in newly expanding office blocks. Existing connections to privilege decided mostly who actually had to think, make decisions, and have power.

In its most extreme form, a prevailing “science” during the years when our school day was designed was eugenics. The now debunked science that tried in part to explain that privilege was deserved because it was in your genes. Another of history’s ironies was that Hitler, Roosevelt, and Churchill all believed in eugenics, particularly in relation to supporting their own privilege and status.

I think it is easy to see why under these circumstances, Education was designed to be comfortable with elitism, fake science, and a structures to ensure most people didn’t become thinkers. This might be why a 13 year old said to me this month that “school isn’t about learning, it’s about memorising stuff for two weeks and then moving on.” It’s also why after generations, education’s elitism is so normalised that Principals and particularly privileged families are comfortable to sit with the way things are. 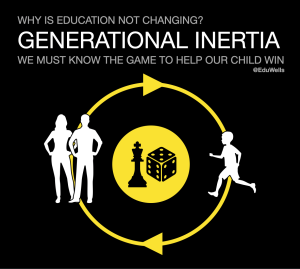 On the topic of why we don’t change, I think it primarily comes down to what I call generational inertia. Any parent who wants to take advantage of a privilege and help their child through the system, needs the system to remain the same. They need to know the game that’s being played because they know how their privileges can help. They know what it looks and feels like but if school changed and had new structures and values, they wouldn’t know how to use their privilege to win the game. After four generations of this inertia, parents able to assist and keen on their child winning it, continue to push like Donald Trump for the same unfair game.

In New Zealand, its biggest city, Auckland has just been through a 10 week Covid19 lockdown that the rest of the country’s schools did not have to suffer. NZ educators are discussing how we can possibly assess and compare the students of Auckland with the rest of the country as seniors are normally sitting exams soon. Nobody seems to have noticed that every year there are students with the same level of difference in their life circumstances and ability to prepare for assessment within and between each school and our Trump system never shows any concern. I worry that this year the conversation has changed because for the first time, the unfairness is impacting on the usually privileged minority within Auckland.

Sometimes the only thing stopping you from progress is your attachment to a previous conceptual frameworkpic.twitter.com/hYMRkm57Bg