Does your classroom lean to the left or right? 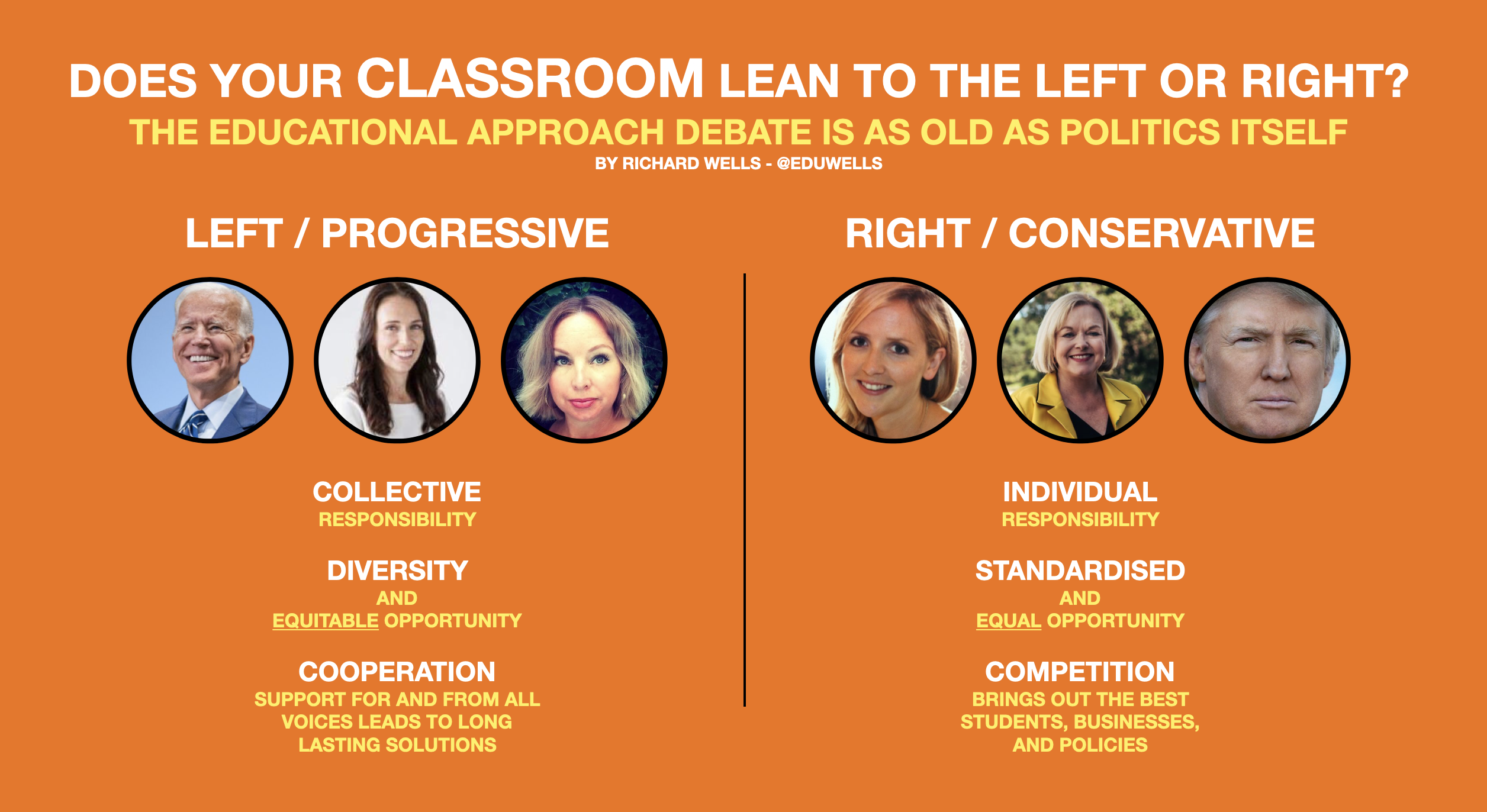 Just like America, New Zealand is also heading towards its election season and in fact has its election day in one week’s time. With the two main countries that read my blog focused on elections and with the debates in both countries being as predictable as ever, I thought it was a great way to frame an educational debate that came up in my country this week.

Some people argue that politics and possibly people never change and to me this rung true this week as a right wing think tank published evidence to argue the case for standardised lists of knowledge and fixed hierarchies of teacher status over children, followed by a counter from a left-wing principal and writer, arguing for progressive, student-centred, social constructivism.

To me it seems obvious that schools go around in circles arguing these two points for exactly the same reasons politicians spend decades arguing the same points, and not just about education.
In simple terms, this is the common “I” versus “WE” debate.

Through a right wing lens, it is through individual liberty that “I” should take responsibility for myself in competing on a ‘level playing field’ to show “I” deserve success. The demand on students here is that teachers will deliver a standardised curriculum in every school creating supposed fairness and it is down to the individual student to engage with that and work hard for good results. This way people can be justly compared and rewards issued accordingly. Through a right wing lens this situation encourages the disadvantaged to work harder and a focus on employment skills creates a strong economy.

Through a left-wing lens, we focus on the diversity and disadvantage that many students have and we build collaborative and student-centred environments that aim themselves to truly level the playing field and remove the sense of competition. Like in politics, the left set themselves a much bigger challenge. And thus with higher social standards, can struggle to deliver across the whole system.

On the right, the solution seems straightforward. Create a standardised competition for all individuals, where supposedly the hardest working succeed. It is through competition we get the best students, the best businesses, and the best policies. A standardised approach means understanding the system is comfortably predictable, after all, conservatives are comfortable when things are as they always have been.

On the left, the world has significant ongoing problems and school plays a part in building solutions. This means developing young people as active critical thinkers, activists, socially collaborative, empowered citizens. By exploring problems that are yet to be solved, deciding on a standardised curriculum for every student becomes irrelevant but in doing so unpredictable and more challenging. The left assume we will not solve our collective problems if we are competing against each other, both inside and outside schools.

As a final thought more than a conclusion (this debate will never conclude) my progressive understanding sees major downsides in competing to define a winning minority of either students or policies. The Conservative, right wing approach is content with its hierarchy of important and less important people resulting in winners and losers and increased inequality, which economists are agreed is the biggest single issue on the planet, driving everything from climate change to impacts of Covid.

The right would lower tax (reduce support), increase competition (rank importance), and standardise the system (curriculum), all of which are proven to benefit the already privileged and resourced. This privilege is proved every year in educational and societal outcomes in the UK, U.S. and NZ.

It is important to understand that official government recognition of progressive education (at least in NZ) is new and all of the world’s inability to deal with climate change, covid19, inequality, racism, and sexism has all been a failure of generations of people educated under conservative and traditional standardised curriculum that discouraged direct involvement with the issues and focused on everything in purely academic form. To me this only shows we must switch from competing as individual “I’s” to working globally as a collective “WE” and classrooms should follow suit.

The reality is illustrated very well in this video “On a plate” by Toby Morris brilliantly shows how exams and other ideas of measuring personal ability and status are meaningless in a complex world.  Also available as a cartoon.